I'm always looking for ways to make our morning routine go smoother, and breakfast seems to be the thing we never have time for. Soooo...drive-thru it is!

I LOVE McDonald's Egg McMuffins, but I also know that they aren't the healthiest thing we could be eating for breakfast (or the cheapest). So what to do when you want something quick and easy and inexpensive for breakfast? You make them at home! It's so easy...you cook the egg right in the microwave!

I first tried this recipe out on a Sunday morning. Rick called me at work the next day (on my cell) three times until I finally called him back. I asked him what was wrong. He said "How did you make that egg in the microwave?" Yup, that's why he called THREE times in FIVE minutes. I gave him the instructions, and could hear my boss laughing in the background. I told Rick my boss thought it was funny, so ten minutes later I got a text from him saying "I'm texting so your boss can't hear...but that was so cool!"

Try it for yourself. 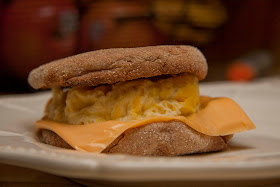 Spray a coffee mug with cooking spray. Crack the egg in a coffee mug and scramble with a fork. Cover with a wet paper towel and microwave for about 40 seconds. Place the cheese slice on one side of the english muffin, top with the egg, and the other muffin half and enjoy! You could also add Canadian bacon, a sausage patty, or bacon...although those don't exactly make it "healthier."
Kristin @ Yellow Bliss Road at 5:40 PM

Thanks for taking the time to leave a comment. I do read each and every one, and I try to respond to as many as I can, either by email or return comment. If you have a question, be sure that your email is linked to your Blogger profile, as I will answer via email. Thanks for stopping by!